"Hi, Impact" Will Breastfeeding On Zoom Break The Work-Life Barrier Once And For All? – Mental Health and Lifestyle Information

Will Breastfeeding On Zoom Break The Work-Life Barrier Once And For All?

Boundaries? What boundaries. My bedroom is my office and my children are my colleagues. The work day begins when the Zooms begin, but collaborators on the West Coast call in for our 9 a.m. EST, and you can bet they are not in business attire, even from the waist up. What this time isolating at home has ironically afforded me is more intimacy with my colleagues’ homes: their bookshelves and houseplants or the way they assemble their sandwiches when the meeting strikes at lunchtime.

I am, however, unfamiliar with their breastfeeding routines — but perhaps I shouldn’t be?

“I do it all day long,” says Tracy Zane, an executive director of marketing for Condé Nast Entertainment. The “it,” here, is breastfeeding, which Zane does, proudly, on Zoom. “To me it’s no different than someone saying, ‘I need five minutes to get my kid set up on their Zoom class’," says Zane. “I say, ‘I need five minutes to get Cora out of the crib and get her settled. I’ll be back on in five without video.’” 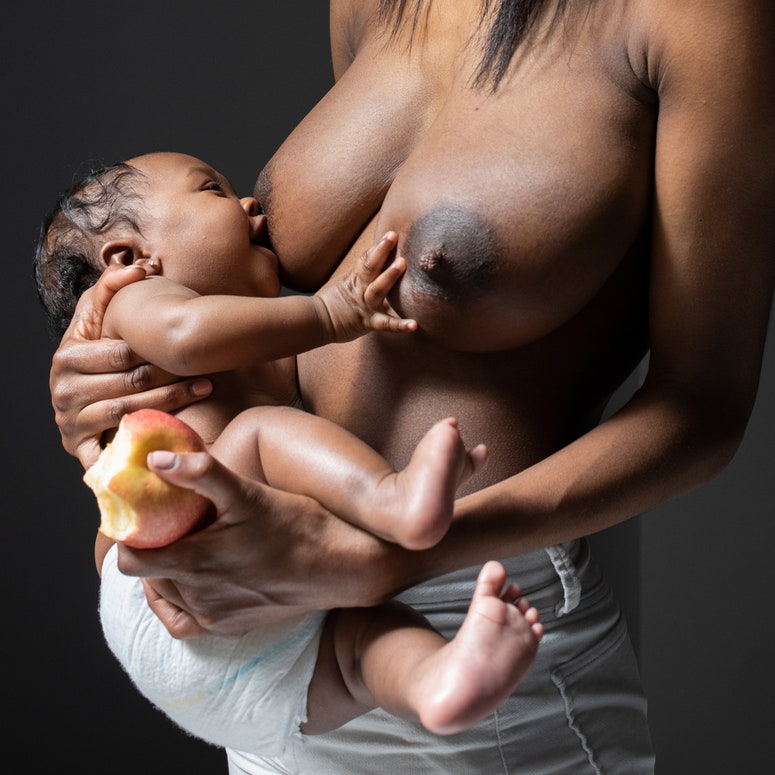 As I hope I don’t need to remind anyone, the United States is one of only five countries in the world that does not offer any universal paid parental leave. (The others are Lesotho, Liberia, Papua New Guinea and Swaziland.) The draconian back-to-work requirements that many women (and men) face have been linked to lower rates of breastfeeding, and the inverse is true as well: “Countries with generous maternity and parental leave policies — such as Denmark, Norway and Sweden — tend to have high breastfeeding rates,” stated a 2012 “State of the World’s Mothers” report.

Much has been written about the erosion of work-life boundaries in the age of COVID, and there’s no telling whether this unplanned social experiment will be a net positive for employees and employers when the dust finally settles. Working parents, I can solidly say, have been profoundly tested by these unprecedented circumstances. But there might be one way in which the pandemic is a boon for working mothers — particularly those who are just returning to work — in that it might make it easier to continue breastfeeding. According to a survey by the breast-pump manufacturer Medela, more than 40 percent of women are more committed to breastfeeding because of COVID.

The challenges of continuing to breastfeed when you return to work are significant: when to nurse or pump, for how long, and how to fit it in with work-related responsibilities. Goodby to sweater dresses, jumpsuits, or any other item of clothing that doesn’t allow you to strip quickly from the waist up. Martina Navratil, a business director for Condé Nast and a new mother who had just returned to work after having her second baby, anticipates that it will be easier to feed her baby this time around — less time dealing with the pump and all its annoying parts, less time worrying that she wasn’t producing enough milk. Navratil hasn’t yet nursed on Zoom, but she’s open to the idea. “I supposed I’d just be muted, and would turn my camera off, and then — no biggie — you can get away with anything. If I was in a meeting with my smaller team, and trying to nurse, I would just imagine myself angling the camera up and then going for it,” she says. “I don’t think I’d allow myself to be embarrassed about nursing if she was making some weird noise that made it obvious.”

“Nursing is going to be a completely different experience for women who are working from home,” says Jada Shapiro, a maternal health expert and founder of boober, a platform that connects parents to lactation consultants, birth and postpartum doulas, and mental health therapists. Shapiro specialises in immediate postpartum care, but says that she fields a lot of requests for help when women return to work in an office. “Once you go back to work, you are generally not going to make as much milk,” Shapiro says. “The pump is just not as effective as a baby at stimulating the breast.” Among her clients, she’s now seeing patterns that mimic countries that have more generous leave policies — more women meeting their breastfeeding goals because they are able to nurse rather than pump. (A note here that every woman should set these goals in terms of what is best for her, whether it’s zero days of nursing or 365.)

Shapiro describes a video call in which a new mom began nursing without skipping a beat. “We were talking details of our upcoming webinar and then she started breastfeeding. The baby had to eat, she latched on, and we kept talking. I’m sure she felt comfortable while talking to the founder of a company with a mission to make breastfeeding easier for people, but I truly hope all moms and lactating parents will feel the same level of comfort during their work-from-home life.” The model and entrepreneur Alexis Kristiana described a similar experience. Early in the work-from-home era, she would move her laptop out of view and let the people she was speaking with know that she could still hear them. But a few weeks ago, she had what she describes as a “breakthrough”: “My son woke up from a nap and wanted to nurse, and I just fed him on the spot. I had this feeling that we shouldn’t separate that part of our life. If your kid is hungry, it is your job to feed him. You shouldn’t have to hide that.”

This gets at one of the potential, inadvertent benefits of our punishing social experiment in juggling work and childcare. Like the breastfeeding selfie, the breastfeeding Zoom call could normalise the act, and just maybe make it a bit easier for working mothers. (Let us not forget that Instagram didn’t allow pictures of breastfeeding mothers until 2015.) “I’m a firm believer in nursing everywhere,” says Shapiro. “You are just feeding your child. Unless your company has a policy that there’s no eating during meetings, you should be able to nurse during a meeting.” Kristiana echoed this: “If you were on a call and you were hungry, you wouldn’t stop yourself from drinking your smoothie.” We can all drink up to that.

This article was originally published on Vogue.com.

7 Simple Ways To Incorporate A Break Into Your Day

When was the last time you took a break? And we’re not talking about the “break” you think…
bybasxm
No comments

The Secret To Restorative Rest During Lockdown? Rain Sounds For Sleeping

Spotify’s year-end Wrapped lists are always something to behold; a unique and deeply fascinating form of social anthropology.…
bybasxm
No comments

As the fight for racial justice takes place against the backdrop of the global pandemic, the need for…
bybasxm
No comments